Fanling Babies Home was founded in 1936 by Miss Mildred Dibden, a missionary from England, as a Hong Kong children’s home for the care of homeless babies. Miss Dibden moved 49 children under the age of three from Cheun Chau to Fanling Babies Home in the New Territories. Ruth Little, an Australian missionary, was her invaluable assistant.

Miss Lucy Clay, a registered nurse and graduate of a missionary training college, began as an Assistant in November 1948. She became the Superintendent when due to illness Miss Dibden returned to England and subsequently stepped down. 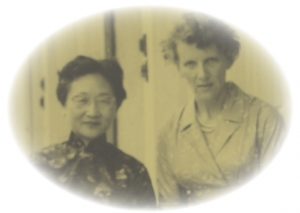 Miss Dibden founded Fanling Babies Home for the care of destitute children under the age of two. When Miss Clay arrived at the orphanage, the mission of the orphanage was merely to provide a Christian upbringing for these little ones.

The Social Welfare Department was in its infancy, without even a Child Welfare Section. Few rules or guidelines existed. But this changed in the 1950’s. Abandoned children became the wards of the State. Government policies for the care of these children were established such as, an official search for relatives and adoption if none could be found.

During Miss Clay’s supervision, she implemented the Social Welfare’s new policy to find families for the children at Fanling Babies Home. To the Protestant trained nurse, this meant adoption into a proper Christian family. The adopted children found families in Hong Kong, Canada, England, New Zealand, United States and other countries. 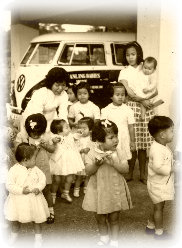 Children’s Garden (名為「烏溪沙兒童新村), in Ma On Shan, was established and operated by the Christian Children’s Fund. The children lived in small family groups under the care of a cottage mother. After turning 18 years old, suitable work was found for each child. Some returned to Fanling Babies Home to work as amahs caring for the babies and young children. 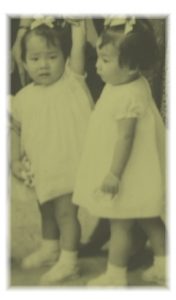 Mildred Dibden rented the estate, on Main Street in Fanling, from an elderly Chinese landlord. He built the estate to accommodate his family and relatives.  In addition to the main two-story house, there were several smaller one-story buildings on the compound.

The two-story main house easily accommodated a nursery school, dispensary, and bedrooms. Babies were on one floor while toddlers were housed on the other floor.  Older children and staff were housed in the smaller one-story buildings on the estate.

Fanling Babies Home was sponsored first by the Hong Kong Evangelical Fraternity and friends in Hong Kong, England, and Canada. By 1955, the Home Council in England, Home Council in Canada, Hong Kong government grants, and Christian Children’s Fund, Inc. supplied the majority of the funding.

Orphanage Closed and Transfer of Children

By the early 1960’s, the main building at Fanling Babies Home was in sad disrepair. In Tai Po, construction on a new home began and the corner stone was laid May 23, 1965.

Fanling Babies Home closed and the remaining staff and children moved to Pine Hill Babies Home in 1966. Eventually, the new Home became a school dedicated to the care of children with special needs, managed by Hong Chi Association.

Contact us for more information or to chat with adoptees from Fanling Babies Home at fanling@fanlingbabies.com who can tell you much more.

Remember to tell us the orphanage(s), year(s) you were there, if adopted the date, so we can connect you with others from the same orphanage.

Former occupants find it worth the pilgrimage to see where the orphanage used to stand.