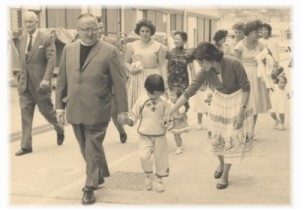 In Hong Kong, we knew him as Reverend H. Osborne. He was the Superintendent of St. Christopher’s Home in Taipo, one of the largest orphanages in Hong Kong during the 1960’s. Reverend Herbert Osborne was an extremely caring person who dedicated his entire life to the service of others.

We know very little about Reverend Osborne’s early life. He was born in 1907 to a large working class family. He was the second oldest of 11 surviving children. He had five sisters and five brothers. He grew up in Liverpool, England.

Herbert Osborne was a good student. He always had a strong sense of faith just like his grandmother. He pestered his father to allow him to go to a School of Divinity in Bristol. Back in those days, that was the only avenue for the respectable poor to obtain an education and vocation. This is where Herbert learned Chinese.

Herbert Osborne joined the Bible Churchmen’s Missionary Society (BCMS) in 1927. The Divinity School sent Herbert Osborne on his first mission. His first assignment was to Persia. Reverend Osborne found his true missionary passion when he was subsequently sent to China.

Upon his release and expulsion by the Chinese Communist army, Reverend Osborne moved to India as a missionary in 1945. Recognized for his heroic missionary efforts in China, he was asked to be a UNICEF Goodwill Ambassador. Reverend Osborne then moved to Hong Kong as the Superintendent of St. Christopher’s Home.

It was a natural fit for Reverend Herbert Osborne to become the Superintendent of St. Christopher’s Home in the fall of 1960. His missionary work in China prepared him well to manage the large orphanage in Hong Kong. 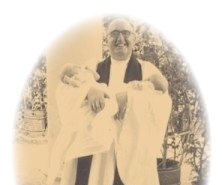 St. Christopher’s Home was founded by Bishop R.O. Hall on the principle of Christ’s love for all children. Reverend  Osborne exemplified this love in that he knew the name of each child even though the orphanage housed 300 or more children at one time.

Reverend Herbert Osborne was the tenth superintendent. His other responsibility was as the Supervisor of the Kei Shek Primary School. Caring for the Home’s children meant providing them with a proper primary education, outside secondary schooling if possible, vocational training, extra-curricular and religious activities to build a balanced character.

At the end of 1968, Reverend Herbert Osborne retired from St. Christopher’s Home. He moved back to England to be closer to his sisters and relatives. Reverend Osborne continued to stay active as a Bebington Vicar. In 1976, he passed away in Cross Lane, Bebington. Services were held at the historic Anglican St. Andrew’s Parish Church.

Those from St. Christopher’s Home remember and dedicate this simple tribute to a wonderful, jolly man who positively shaped many young lives.